What Is Six Sigma?

Six Sigma is a problem solving methodology rooted in data. Born at Motorola in 1986, the approach quickly gained recognition among global corporations thanks to Jack Welch at GE.

Today, Six Sigma is applied across organizations, large and small, and is heralded for its rigorous, data-driven approach to improving process performance and instilling continuous improvement.

Six Sigma is more than simply a set of tools; it is a methodology that brings a roadmap, roles, language and culture change to an organization. It is about identifying your biggest problems, assigning them to your best people, and providing the resources and support to solve those problems—once and for all.

What Does “Six Sigma” Mean? 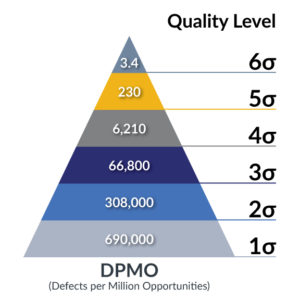 The goal of Six Sigma is an aggressive one. It translates to only 3.4 defects per million opportunities (DPMO). In a six sigma process, 99.99966% of the opportunities—defined based on those critical elements important to your customers—are defect-free.

When considering defects and opportunities, it’s important to define them through the eyes of your customer. Rather than counting every possible opportunity for an error, you want to count the ones that are most important.

The heart of the Six Sigma methodology is the DMAIC roadmap, which combines sound problem solving methods with proven tools. DMAIC stands for Define-Measure-Analyze-Improve-Control.

One of the goals in a DMAIC project is to identify the most significant variables, or X’s, affecting the outputs, or Y’s, of the process you’re concerned with. This is characterized by a simple equation: Y = f(X). If we understand the relationship between X’s and Y’s, where the X’s are the customer’s needs, and the Y’s are the owner’s needs, we can directly measure those things that keep us in touch with our customers.

Goals in a DMAIC project are to identify the most significant variables affecting the outputs of the process you’re concerned with and to ensure that a problem is never going to come back.

Another goal of a DMAIC project is to ensure that a problem is never going to come back, because we’re finally going to get an intimate understanding of the way our process works.

There’s a well-supported rule of thumb, the Pareto Principle, which states that 80 percent of the effects in any process are caused by 20 percent of the causes. Also known as the law of the vital few, with these critical input variables properly identified, we can put systems in place to ensure that improvements are maintained for the long-term.

Within a Six Sigma deployment or effort, there are a handful of important roles. Here’s an overview of those roles and the responsibility and associated training of each.

Key leaders of the culture change, executives and deployment leaders own the vision, direction, integration and results of a Six Sigma program. They’re responsible for determining the scope of a deployment, and identifying goals and strategic priorities that Champions will use to align projects.

The core team is a group of multidisciplinary business leaders from key supporting functions of the company: finance, human resources, information technology, communications, training, and operations. They are responsible for taking the vision of the executive team and making it a reality. They help create the supporting infrastructure that enables the long-term success of Black Belts and other performance excellence leaders. Of this group, the finance representative plays a particularly important role in assisting with forecasting for potential projects and validating and tracking project savings.

Master Black Belts are gurus of the process excellence world. They’re highly respected and sought-after resources who not only wield considerable knowledge of problem solving methodologies, but also coach and mentor other professional problem solvers, including Green Belts and Black Belts. Master Black Belts take more of a strategic role in the organization both in selecting tactical projects needed to achieve strategic goals and in developing future leaders that will eventually manage and lead the business. They also manage the project pipeline, develop and administer curriculum, support the deployment leader and champions, and lead large-scale projects.
Training: Master Black Belt Development Program

Black Belt certification is seen as a personal and professional development building block.

Black Belts are key resources of a Six Sigma program who are 100 percent dedicated to the effort. They facilitate and lead projects, provide deployment support, and coach and train other performance excellence resources. As dedicated resources that complete four to six projects a year, Black Belts experience a 7:1 ROI and average $200,000 in median savings per project. Additionally, Black Belt certification is seen as a personal and professional development building block that prepares people for leadership roles later on.
Training: Black Belt | Black Belt Online | Green Belt to Black Belt Upgrade | GB to BB Upgrade Online

Providing invaluable process expertise, Team Members assist Black Belts with data collection and tool application. They also assist the Process Owner with the long-term implementation of the solution and extend the reach of the Six Sigma language into the trenches.
Training: Yellow Belt Online

While some companies deploy Six Sigma solo, more often than not it is part of broader continuous improvement or performance excellence efforts that include Lean, innovation, and other problem solving approaches.

Six Sigma is often applied in conjunction with Lean. Lean focuses on reducing waste so what is left is value-added. Six Sigma focuses on reducing variation and defects. Together, the two become a powerful combo to first lean out and then perfect your processes. In the last decade, companies have moved from treating Lean and Six Sigma as independent approaches to combining them into an improved operating system.

All of these continuous improvement efforts roll up into the organization’s strategic planning and execution, ensuring that everyone is working on improvements and innovations that align with the company’s strategic goals.