Capturing All the Fish in One Net: Cause-and-Effect Diagrams

That’s why Sakichi Toyoda developed the interrogative technique known as 5 Whys. This process encourages team members to delve progressively into deeper causation areas by asking “Why?” five times. As you’ll see, the 5 Whys is an integral part of creating a cause-and-effect diagram, a tool that gives teams both structure and freedom in brainstorming causes. But, first, let’s look at the 5 Whys.

Table 1 provides an example of the sequence of questions and responses used in a 5 Why analysis. In this case, it is quite clear how this approach leads to a different root cause than would have been suspected originally.

The cause-and-effect diagram opens up opportunities for all team members to brainstorm ideas and offer possible causes. It shows the relationships between the identified causes and the problem. Through these connections, the final root cause becomes apparent. This information then provides direction to the team as it collects the most important data to prove or disprove its theories about the root cause of the problem.

Steps to Display Brainstormed Suspected Causes on the Fishbone Diagram

Tips for Facilitating the Process of Creating Fishbone Diagrams 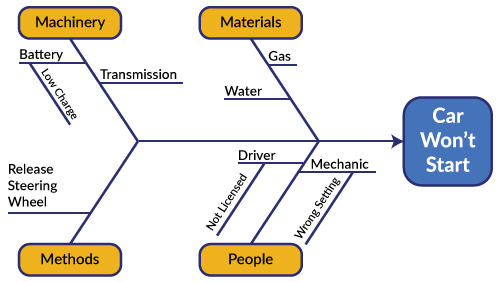 When coaching Lean Six Sigma teams, I have observed many occasions where team members think they know the root cause based on experience, rather than a systematic analysis using the 5 Whys process. Generally, this approach does identify symptoms of the problem, but it rarely leads the team to an actual root cause. When’s the last time that you heard a baby cry and guessed the root cause was the parents’ car being in the shop? That’s the trouble with superficial identification of suspected root causes; they don’t go deep enough to prevent recurrence.

At some point, the answer to why actually will be a solution, and that means you’ve gone far enough in your exploration.

Sometimes I am asked whether five is a magic number that inevitably leads to a root cause, and of course, the answer is “No.” The point of the 5 Whys process is to keep asking why until you can go no further. At some point, the answer to why actually will be a solution, and that means you’ve gone far enough in your exploration. So when you ask, “Why were the parents unable to find alternative transportation to the grocery store?” and the answer is, “They had just moved to town and didn’t know who to ask to give them a ride,” you know the solution—make some friends who have cars and some time!

Whenever your team wants to display brainstormed ideas in a hierarchical way that demonstrates their impact on a specific problem/effect or other outcome, the cause-and-effect diagram is a particularly useful tool.

Here are some questions for you to consider regarding the use of cause-and-effect diagrams. They provide a way for you to evaluate your understanding of this tool quickly.

Deborah Hopen has over 40 years of experience in total quality management, and has served as a senior executive with both Fortune and Inc. 500 companies. She is a Fellow of the American Society for Quality and is the editor of ASQ’s Journal for Quality and Participation.